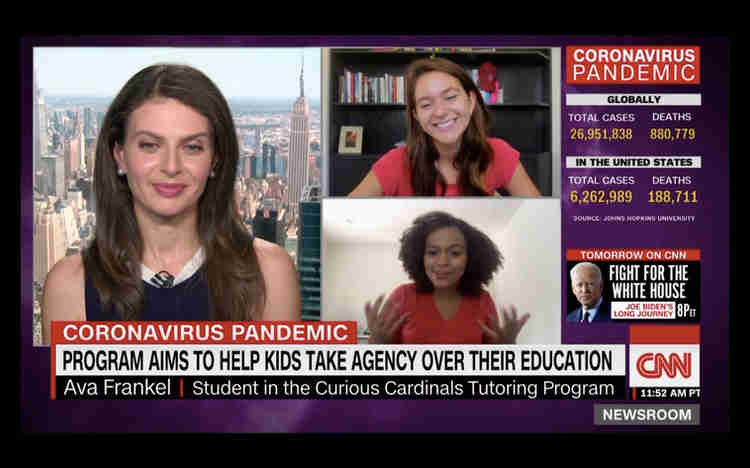 Business professionals have continuously advised our team that we should prioritize making Curious Cardinals profitable before we turn to growing our financial aid program or other initiatives that fall in the realm of diversity, equity, and inclusion (DEI). Conversely, some of our peers have asked us whether we think it is possible to ever create an equitable education business. Neither of these comments are easy to hear.

Despite what anyone tells us, our team remains adamant that growing a sustainable business and creating social change aren't mutually exclusive. DEI has been central to our mission as an education startup since its inception. So, I’m going to tell you the story behind Curious Cardinals’ workshops.

It’s March. Students evacuated schools and co-founder Audrey began tutoring two middle schoolers, one in New York and one in Los Angeles. She realized they both had a nascent interest in social justice but no foundational knowledge. She had the idea to create online classes (which we’ve since renamed workshops) to connect students from across the US with similar interests.

“When Alec and I really started discovering what our purpose was with Curious Cardinals, it was immediate, it was obvious that I wanted to teach a class on mass incarceration,” Audrey said. She began writing the syllabus.

Then on May 25, 2020, Derek Chauvin murdered George Floyd. The US erupted in protests. Students heard cries of Black lives matter. Their Instagram feeds were suddenly flooded with infographics on police violence.

When Audrey asked her students why they took her workshop, they universally said they wanted to learn about race, policing, and mass incarceration, topics their schools didn't offer classes on.

So, in just eight sessions in four weeks, Audrey equipped her students with a historical foundation to better understand some of the most pressing issues Gen Z faces. Take a look at the syllabus section headings:

Week 1:  From Slavery to the War on Drugs.

Week 4: Prison Abolition, Restorative Justice… What does a promising future look like?

For Audrey, teaching students about the prison industrial complex meant teaching them what she wished she had learned in a classroom setting at their age. In 10th grade, Audrey read Just Mercy by Bryan Stevenson. Just Mercy is about Stevenson’s experience as a lawyer in Alabama trying to exonerate a man wrongfully sentenced to death. At first, Audrey was disturbed. Then, she was galvanized. “Why is this such a hidden topic? Why do so few people know about it? Even with myself, why did I only discover the tragedies and realities of mass incarceration in 10th grade?” she said. Reading Just Mercy was her personal coming to consciousness, and she wanted to be there for younger students as they had their own.

As she was preparing to teach Mass Incarceration, Audrey had the idea for Curious Cardinals to donate the tuition from her workshop to the organization that inspired it in the first place, Bryan Stevenson’s Equal Justice Initiative. After finding a program to match Curious Cardinals' donation, the company ended up donating a total of $5120 to the EJI.

Since she was a white woman who had never been incarcerated, Audrey invited guest speakers who were either experts on race and criminal justice or members from the affected community. “I wanted to be very transparent about race and who is teaching things,” she said. “It’s not my story to tell.”

The guest speakers and authors in the curriculum all had different perspectives on criminal justice. Students read Angela Davis and Ruth Wilson Gilmore to understand prison abolition. They also spoke to Terrell Hall, the Post-Release Program Manager at Defy Ventures who was previously incarcerated, about how prison changed his life for the better. Harvard Law Professor Randall Kennedy discussed his work on the intersection of race and the law.

Audrey invited other college students involved in criminal justice to show her students how they could apply what they learned in her workshop. Two students from the Stanford Prison Renaissance Project shared the zines they created with inmates at San Quentin. “It’s particularly meaningful, because we’re not just reading academic writing on the prison industrial complex or mass incarceration, we are reading real inmates’ artistic expression of their experience,” Audrey said. Some of her students were even inspired to write letters to the inmates featured in the zine.

So many speakers were eager to visit Audrey’s workshop that she had to schedule additional times to accommodate them all. Since then, guest speakers have been a fundamental part of Curious Cardinals workshops.

For high school senior Ava Frankel, learning alongside students from different backgrounds was powerful. “My favorite thing about the class was learning about other people’s experiences and really sitting and listening to their perspectives and questioning mine,” she said.

Hearing from the guest speakers concretized all she learned in the workshop. “When you read about things on the news or in Instagram it’s kind of just numbers and stats, but when you’re able to be in a classroom setting, it’s people, it’s faces, it’s understanding all these policies are really harmful and horrible but they have really personal effects,” Ava said.

You may recognize Ava from when she and Audrey appeared together on CNN. Ava is a senior at the same high school Audrey and I graduated from. Throughout the years Audrey has been a mentor to her, first on the debate team and later as her teacher. “Not only did Audrey’s passion give me more passion, but the encouragement, and support, and the safe space she created in the classroom helped me become a better learner,” Ava said.

The Mass Incarceration workshop holds an important place in our company’s brief history because it set the precedent for what we value as an education business. However, it was just the first step toward creating an equitable business.

Every day, our team reassesses our current measures and pushes each other to think more boldly. Equitable begins with offering courses that center marginalized voices. Equitable also means providing space to any curious student regardless of their ability to pay tuition. Equitable is hiring teachers who represent a broad array of experiences. Equitable is offering workshops that appeal to students from diverse backgrounds. Equitable is creating curriculums that highlight marginalized perspectives. Equitable is writing our pronouns next to our names in Zoom.

Equitable is...so much more than I have space to write about. Even if I dedicated an entire blog post to listing our current DEI initiatives and future goals, that wouldn’t be enough.

The single most frustrating setback we have faced this fall is that we have yet to find a fiscal sponsor. Until we do, we can’t accept tax deductible donations to subsidize our financial aid programs in a more sustainable way.

Curious Cardinals’ bottom line is double. For us, profit isn’t the sole measure of success. Positive social impact is equally important. I don’t think we even know all the ways we can make our business more equitable, but we won’t stop trying.

So can we create an equitable business? Absolutely. Will it be difficult? Without a doubt.

Cece King is the Editor of The Lightbulb. Have a question we can investigate? Curious about a speaker, class, or teacher? Email The Lightbulb any story tips at info@curiouscardinals.com. 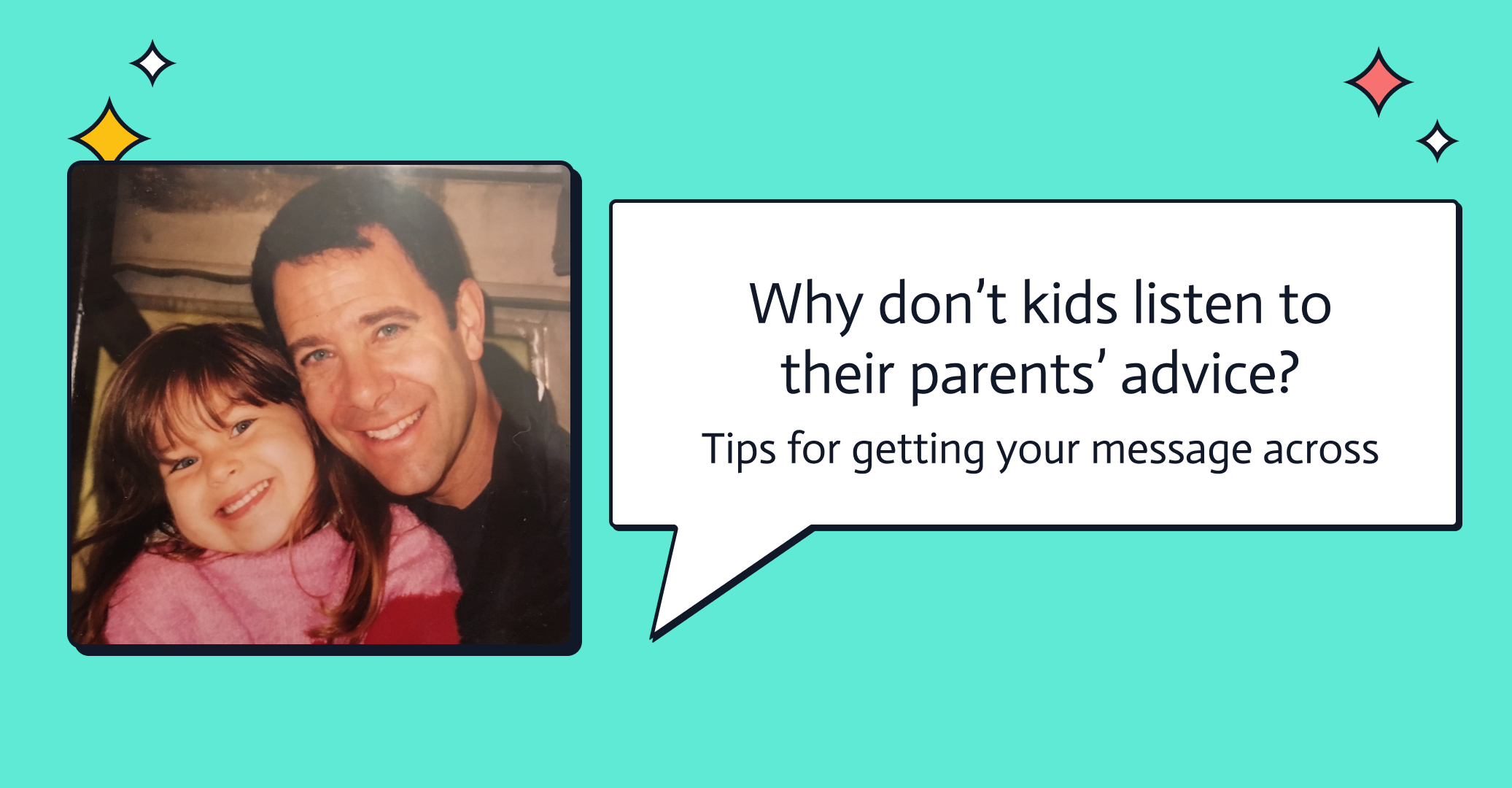 Are Your Kids Ignoring Your Advice? Don't Worry.

This week, I spoke to two moms who both emphasized that when they try to give their children advice, their kids “don’t listen to them!”