Jaidyn Hurst, a rising senior at the Hotchkiss School in Connecticut, is busy, to say the least. When we interviewed her this summer, she was Zooming in from Barcelona, where she was a student on the Oxbridge program majoring in Spanish, taking lessons every day, doing international relations as a minor, and also soaking up the sites of the city, “walking and roaming around and going to the beach.” Just days after returning from Barcelona, she was set to start working at the Colorado nonprofit Valley Settlement, where she is designing a music program to teach in Spanish to adults and children.

Jaidyn, who now lives most of the year at boarding school, grew up in Aspen, Colorado and also partly in Paris France, where she lived for 8 years and attended bilingual school. “My classes were in French and the other half of the day they were in English. So I started learning French when I was two years old and my parents kind of instilled this mindset that like, you need to speak more than one language. And I was so jealous of everyone that could go in between different languages and I started learning Spanish in school and it was very similar to French. And I loved learning about the different vocabularies and finding connections between languages. It was always my life's dream to be quadrilingual. And so I decided two years ago I wanted to learn a fourth language and I was either between Arabic or German. And I visited Marbella in the southern part of Spain. And I just decided I wanted to learn Arabic after seeing all the Moorish architecture. And I've traveled a lot in the Middle East. I really enjoyed listening to language and I wanted to learn how to speak it. And I know it's a very complicated language, but I kind of just felt like I wanted to learn it.”

Since starting from scratch with Arabic a year ago last summer, Jaidyn has worked with her mentor Lydia Cawley, a graduate Arabic major from Harvard (‘20) and the University of Cambridge (‘21), to complete more than a year of college-level Arabic. She is making such quick strides by memorizing loads of vocabulary, mastering complex grammar structures, writing her own translations, and practicing her speaking and pronunciation.

Arabic isn’t offered at Hotchkiss, but there Jaidyn was fascinated by courses like “Encountering the Other,” where she learned about Christianity, Judaism, Islam, and other religions, and a course on Israel and Palestine, which further sparked her interest in international relations and global affairs.

Despite her packed academic schedule, Jaidyn committed herself to her language study, with the guidance and accountability provided by her mentor, Lydia - “I did Arabic all in my free time,” often 2 or 3 times a week.

Jaidyn makes time for Arabic alongside several extracurricular commitments which encompass singing, mentoring of her own, and athletics: “I'm the head of the French club. I'm the head of our all female a capella group, Calliope. I'm also the head of the Hotchkiss Democrats. And I started just writing center tutoring, which helps lower-classmen with their writing. I also do a lot of peer tutoring through our community service organization and also as a Hotchkiss peer tutor. I run cross country, and I played JV girls tennis. Then my biggest passion is music - I write a lot of my own music and I play piano, guitar, and I've been taking lessons with those for a while and I'm a vocal student at Hotchkiss. So I do a lot of singing in the choir. I take lessons weekly. But I write a lot of my own lyrics and my own songs and I record them and I'm working with a new producer and hopefully we'll be releasing some more songs soon on Spotify and other platforms.”

Writing, recording, and releasing her own music has been an endeavor two years in the making, but the impulse to get her thoughts and feelings across in song has long come naturally to Jaidyn. “I'll just be laying in my bed and a whole set of lyrics will come to me and I'll just write them all down and I'll try to find a melody or a tune I like after with piano. And I'll just find a couple of chords that I like and I'll write lyrics to them. So it really depends. I feel like there's no one way to write a song. But I can't not write music. I think that's the only way I'd describe it. Like it's my coping mechanism. So it's like what I do when I'm sad or when I have something I need to say, and I don't really have the proper way to say it. And it's like one of my happiest places, like I've been spending seven hours at the piano and just not realized where the time goes. So it's my favorite thing to do, I would say. “

“When I was younger, I would always make up my own like lyrics and stuff, but I never would write anything down and I always sang, but I think during COVID was the first time, I actually had three months straight of nothing to do and I would just sit at the piano all the time. And I just got into a really big fight with my best friend. And the first song I ever wrote was about her.”

When I asked Jaidyn to describe her style the answer was that - much like her academic and extracurricular interests - it’s an intermingling of several influences: “I would say it's very singer-songwriter. I'm going in more of a pop direction now. I’m now recording a 10 to 12-song album, so it’s more commercialized, and we'll see what happens with that. But on my own, it's more of a singer-songwriter basis; it's very independent music. It's not like super pop. It's way more soulful, I would say. But also country.”

At first, Jaidyn’s music was very much personal for her. Only recently, encouraged by her mom, did she begin to think about sharing her lyrics and talents with the world. “I did not want to release them anywhere at all. I was so against it and no one heard any of my songs until they were released. My mom was the only person I ever played them for and it was her who was like I want you to record them for me so I can listen to some. So I was like, okay. And then she's like, I really think you should consider it. And I was like, I might as well, for fun. Cause I have so much other stuff going on. But I think it's very scary having people listen to a very vulnerable side of you. I think that's the scariest part is having them able to see inside my mind kind of, and analyzing my thoughts and how I see the world, because that's kind of how I see music. It's a way of expressing myself and how I feel. So I think that's been very scary. It's engaging people's opinions and - not that their opinions really matter - but if that changes the way they see me, I think that's been kind of stressful and a big part of it. But I got a lot of positive outreach. They played my song in the dining hall and they'd started playing it at events and it was super exciting as a community. I think that was a big step for me at Hotchkiss. And I think people saw a different side of me that they didn't really know. And a lot of dorm students started emailing me and they asked for songwriting lessons and exciting stuff like that. Like it's the little things and it can change someone else's life if they listened to something they relate to.”

In addition to finding a deeper connection to her Hotchkiss community through her music, Jaidyn has recently connected with global audiences through her live performances: “I recently sang at this event called Culture Fix in Washington, DC. And I was in front of a bunch of senators, it was an actual international relations event that honors a bunch of ambassadors and world artists. And I just could not stop smiling. I was so happy singing my own lyrics and I think it's a different sense of euphoria when it's something that you wrote. I think there's the power behind it that I don't really feel when I'm seeing other people's songs and I'm not worried about forgetting the lyrics because I made them up. There's a different sense of empowerment in it that I love. I find a lot of joy in performing. I've always loved it, so it's been a good experience and something I want to continue doing.” 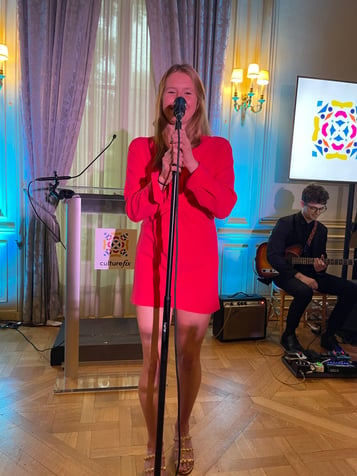 So how does Jaidyn prioritize what is most meaningful to her as a student who does it all?

“I'm one of those people that thinks I need to do everything and it's not a very healthy mindset. Cause there's definitely limits to that. I used to feel like I had to keep on adding things to my plate, but I think my music has always been my priority and I think that's going to keep being my priority. I have to leave school every weekend to record my album. So I have to try to just focus on that. I think it's just kind of doing things I enjoy and doing things I love and kind of stopping something if I don't love it. And I think I've done a good job of only focusing on things I really enjoy. Like I have found time to do Arabic, no matter what, when, where I am, I always find time to work on my languages and to work on my music. So I think those two things are my priorities currently and I know everything will be okay.”

Speaking to Jaidyn, one gets the sense that she’s wise beyond her years, and has learned some important lessons about herself and her core values early on in life that will serve her well: “It's about learning how to enjoy things for myself. I think that's something I struggled with a lot. And I think that's why doing Arabic with Curious Cardinals helped me so much - I was not getting graded. I wasn't getting anything out of it. It's not like I was doing it for school. It was completely for myself and I think that's taken a long time to learn. It's just about doing truly what you love and kind of figuring out how to find time for it. I think that's a growing moment.”

Check out Jaidyn’s music, and read more about her singing and songwriting at her website https://www.jaidynhurst.com/ or at her Spotify, here! We’re big fans of “Take Me,” in particular!

A rising sophomore, Natalie R. is an outside-the-box thinker with an entrepreneurial spirit. A longtime Curious Cardinals student and high school Ambassador, Natalie...

Integral to Curious Cardinals is our focus on student agency, project-based learning, and our mission to create a space where students can research, design, and test...