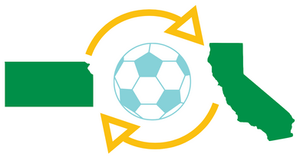 Curious Cardinals teacher Gary Schmidt was so inspired by 76ers superstar Joel Embiid’s catchphrase “trust the process” that he named his first car “The Process”. Gary even took a class with the 76ers manager Sam Hinkie his freshman spring at Stanford. But when I asked him what his favorite team was, he couldn’t name just one. Gary grew up in Lawrence, Kansas and is naturally a fan of the University of Kansas Jayhawks basketball team. But for the NFL, Gary had to go with the Green Bay Packers. “Something about being a six-year-old kid who really liked cheese seeing all these people in Wisconsin with cheeseheads – it’s been a lifelong love since then,” he said.

Gary is a sports fanatic. For Halloween, he dressed up in his favorite jersey with his Curious Cardinals Sports Book Club students. Gary recently proposed a Curious Cardinals class called “Life is a Game: Framing the Narrative of Life Through Sport,” which comes as no surprise since Gary’s own path from Kansas to California is intertwined with his journey as a student athlete. Dedication, determination, and a team mentality are how Gary met his mentors and thrived on the field and in the classroom as an award-winning student journalist. I spoke to Gary about his path to finding, pursuing, and ultimately sharing his passion for sports with Curious Cardinals students.

What has been a continuous passion throughout your life?

It sounds cliche, but for as long as I can remember, I’ve been passionate about sports. I started my career thinking that I was going to be the next Cristiano Renaldo. Now my dream would be to bring together the great education I’m getting at school and move on to a career in sports management.

Why were you drawn to sports?

I’ve connected to people I would have never imagined having been close to through sports. Particularly soccer, which was my favorite sport growing up, is such an international sport. You can meet anyone from anywhere, and it doesn’t matter if you can say a single word to each other, because when you step on the pitch you’re speaking the same language.

When I was playing sports, it was life or death. When I was watching them, it was more than just how many points one team scores. It’s pop culture, it’s politics, it’s fashion. Sports is a great representation of the human experience as a whole. Sports are like any field that requires hours of pure dedication, pouring your soul into mastering the mundane. It’s ugly. It's terrible. It’s waking up early and going running. It’s staying up late and lifting weights. Nothing in the world can stop you. It’s pure euphoria.

I believe that we can reach these moments of tunnel vision in anything we pursue. That's what we’re chasing as humans, and that’s something that sports has given me and so many people. There are so many life lessons that, in my humble opinion as not the most talented athlete ever, are taught best in sports.

Did you have a mentor in your life?

I would like to list two. Oumar Seck was my soccer coach from the age of 13 to 19. I didn’t have a strong father figure in my life, and he filled that role. Although he’s a sensational soccer coach, he made it very clear that there are priorities in life: family, school, then soccer. It's easy to take soccer super seriously, but there are times when you need to take a step back. That’s one of the lessons he shared with me. Getting to see him 3 or 4 times a week most of the year meant our relationship was always strong.

My second mentor is my high school journalism teacher Barbara Tholen. I joined the journalism program my first semester of high school through an intro to journalism class and joined the staff in the second semester and started– you’re not going to believe this–writing about sports. Over the next three years, a lot of incredible things unfolded in my life and in the journalism program itself. We covered the most unimaginable things from a sit-in protest at my school to multiple state tournament rounds for our basketball team. We went to national conventions and won awards that our program had never won before. Barbara taught me the importance of telling stories, and the role of journalists as protectors and purveyors of truth. The nature of how often I was around Barbara Tholen and how readily available she was became an invaluable resource for a difficult transition time in my life.

"Occasionally I would go back to my roots and step into goal. Our goalkeeper at the time was also the kicker for the football team and had to miss our game, so I was his replacement in goal that night."

What traits do you think make a good mentor?

Finding good mentors in your life comes down to need-matching. I was attracted to leadership roles, so I needed to find leaders who existed in my life and I held fast to them. You need to be able to identify what you’re seeking, what your goals are, and find the people in your life who are fantastic at what you want to do. I wanted to be the best soccer player in the world, so I became a disciple to the best soccer player I know. After that I wanted to be an ESPN sports reporter, so I went to the best journalist I knew.

What were the biggest challenges you faced getting to where you are now?

During my sophomore year of high school, I went through a big family transition in my life. I had lived with my single mother up until that point, and it was not a hospitable environment for either of us. So I transitioned to living on my own and eventually moving in with a fantastic friend of mine and staying with them throughout the end of high school. Being able to set out with nothing holding me back to chase my goals was the first and most difficult step. It’s still a difficult step. It’s one of those you never stop thinking about.

Other than that, time management! I was involved in a lot, so it was important to put everything else aside and give everything I could to everything I was a part of. Maturing to the point where I was able to determine within myself what’s important and what I want to characterize my life as a big step.

What was the key to discovering what your passions were?

I took great offense to the age old mantra, “you can’t do everything.” If I liked something, if I felt like it had some value, I tried to put it in my schedule. Going to school an hour early for an extra class at 7am, then going to soccer practice, and after that going to choir rehearsal, the gym for a lift, and then club soccer practice drove me to the edges of the earth sometimes. But I loved to be around people in different groups. The biggest key to discovering my passions was to try everything.

I know that if I can pursue something earnestly until the wheels roll off, I will feel like no matter where I end up, I’ve lived a life worth living. And if I can give my family a better life than I had, financially support them and still have time to spend around them, and wake up everyday to tell them I love them, I don’t care what country I’m in or what I’m doing, I’ve made it.

"This is probably my favorite photo I’ve ever had from my 13 years of playing. This was my junior year against our city rivals, Free State and I’m making this crunching tackle on one of my good friends and lifelong club teammates Landon. We tied the game after two brutal overtimes, but were able to face them at home and win as seniors which made it even more worth it."

What do you wish you had learned in middle and high school that you didn’t?

This is definitely a super Stanford answer, but coming into Stanford I knew that I wanted to go into a more traditional financial field of study. The silicon valley effect is virtually nonexistent where I live in flyover country, but during my first quarter, I kept hearing “CS” and “VC”. I would have wanted exposure to a more focused computer science curriculum or entrepreneurship in general. Those are things that having gone through a year at Stanford, I realize I’m fascinated by, and I wish I had been able to come in with the experience some of my peers had.

What passion project would you want to mentor?

Very truthfully, I’m just invested in finding people who have faced adversity in life, whether that’s a situation they're born into or some trouble they’ve gone through. I don’t know what they would need or what I could give them. But, I would uplift them and share every little trick in the book that I had to live the life of my dreams that I do every day in sunny, beautiful California. That, or something cool having to do with sports!

This Interview has been edited and condensed.

Cece King is the Editor of The Lightbulb. Have a question we can investigate? Curious about a speaker, class, or teacher? Email The Lightbulb any story tips at info@curiouscardinals.com. ‍

Harvard mentor Gaya Meswani always assumed she’d be a lawyer, doctor, or find a career related to psychology: She never could have guessed that by the end of her...

Eighth grader Teddy Goldwyn has been working with his mentor Charlie Paradis for over a year now. Their pairing embodies the phrase “time flies when you’re having fun” –...